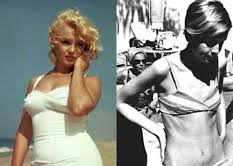 In my experience, I have always wondered what women would rather want to look like in terms of their body shape and appearance and most women that I see tend to want to be one of two body type’s which is being Skinny or Curvy. Depending on the characteristics of some women, any one of these can apply to any given women but it also depends majorly on their mindset and how they perceive themselves to look like.

For example, lets take the skinny argument for the minute and the fact that most teenage girls these days want to look like some of the fashion models that dawn the catwalk and want to look like them. Now there is no problem at all wanting to look like a fashion model but you need to realise that in order to look something like that, you need to be on a very strict calorie controlled diet which consists of a few if not no nutrients which is why most people who are skinny suffer from malnutrition and get ill very easily. It can also be very easy to judge people who look like this saying that they starve their bodies in order to look skinny but for some women in particular this can be a naturally occurring trait to have.

It doesn’t help as well that we live in a judgemental society in the UK that judges people based purely on their looks and appearances rather than their personality which is far more important than appearance.

The other end of the spectrum in this debate is being curvy, now curvy could be defined in two different ways of which the first one being classed as fat which I mean some women can be overweight and carry a lot of fat and still class themselves as curvy but in my opinion, I don’t think this is classed by curvy and more about being overweight. I am not saying that there is anything wrong with this and some women are happy to look like this but in terms of longer term health and well being, this is obviously not going to be a feasible option as you will start to get common problems such as bad joints, diabetes and even arthritis. Most people’s description of curvy is being an average weight with moderate sized breasts and a round, toned bum which most of the women that I have come across with my clients and ex-clients have said that they want to have these characteristics.

The difference between Curvy and being Skinny in regards to it being portrayed in the media is that it’s not as widely reported or shown to be a good thing to be curvy rather than skinny which needs to change because this will give out the message to women that being curvy is good as some women don’t think having curves is good or that it is unrealistic but the fact is that it can be achieved but as I mentioned before, it is purely down to your own mindset and what you think is possible which is vital in achieving your goals.